Smoke’s Poutinerie: Where rock and roll meets fries and gravy

Smoke’s Poutinerie: Where rock and roll meets fries and gravy

If you’ve never seen a suited businessman leap from his audience seat and break into a frenetic air guitar solo in the middle of a trade show seminar, then you probably haven’t encountered Ryan Smolkin. This one-of-a-kind speaker’s wild antics on stage are pulling in bemused show visitors. It takes a moment before I get who this six-foot Canadian clad in blood-red plaid jacket and hunting cap looks so much like, then: Eureka! Add a pair of tinted aviators to Python’s Palin in The Lumberjack Song and you have the ball of energy who fronts Smoke’s Poutinerie.

With 80’s rock turned up to 11, Smolkin knuckle-bumps, gurns and grinds through a presentation that’s one of the more extraordinary examples of audience engagement you’re likely to see. Smolkin calls himself Smoke’s Poutinerie’s ‘Chief Entertainment Officer’ for good reason. Entertainment, in fact, is the secret that has helped this purveyor of Canada’s national fast food (that’s fries topped with cheese curds and gravy) to expand way across Canada and to successfully take locally-adapted versions to the world. Smoke’s Poutinerie, Smolkin assures me, is an entertainment company first, and a food franchise second.

Branding, marketing and high-octane entertainment have fuelled the rise of this upstart business in its ten years of existence. Smolkin, who had a branding and design company for 11 years before hearing the call of poutine, says that this was the recipe behind the success of his first outlet, a venture which was so poorly sited in Toronto (an upper level in a dead-end part of town) and seemed such a downright bad idea that an epic fail was predicted.

In the event, Smolkin and his crew had lines of customers “down the stairs and around the block. We ran out of fries by two o’clock. We’d had 250 orders over lunch.” Saved by an emergency run to the local grocery store, the outlet re-opened to bigger lines. “It was the same on the Friday and Saturday,” he explains. “I’d planned to go to four in the morning but five to nine was all we could handle. We’ve never shut down since – we know the science and we know the model.” 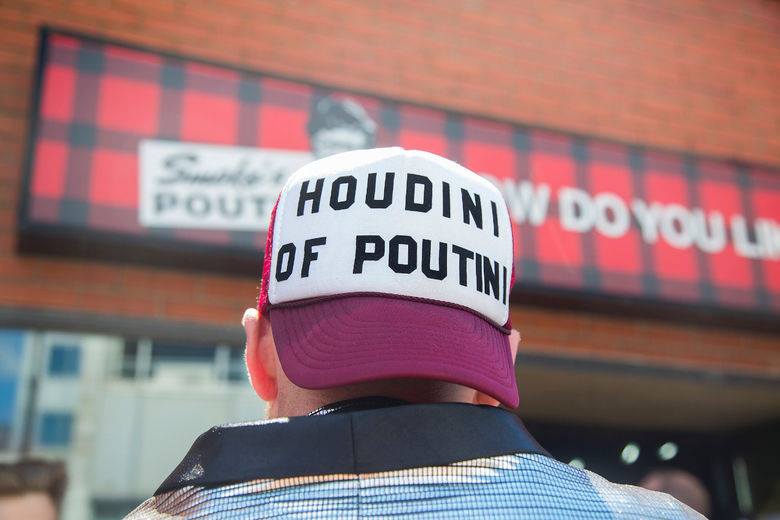 What had sucked in those crowds wasn’t anything special, or even expensive. It was the humble sticker. “All we did was produce two, four and six-inch stickers of Smoke’s face (see ‘Smoke: Man of Mystery’),” he says. “We had kids – including myself – going out putting stickers on ad hoardings and construction sites all over the city. That created a mystery. Who was this guy? Was he a rock star?” The face could have been anyone, and everyone wanted to know. “That went viral. Everyone wanted to know who this guy was.”

So they had the branding – the face of Smoke against the ubiquitous red plaid which is on the poutine boxes and worn by every member of a Smoke’s Poutinerie franchise – and they had a fast-growing presence on social media. “Our following is in the hundreds of thousands now, but that all started with one invite at a time. I remember sitting on my couch inviting people one at a time until two or three in the morning.” 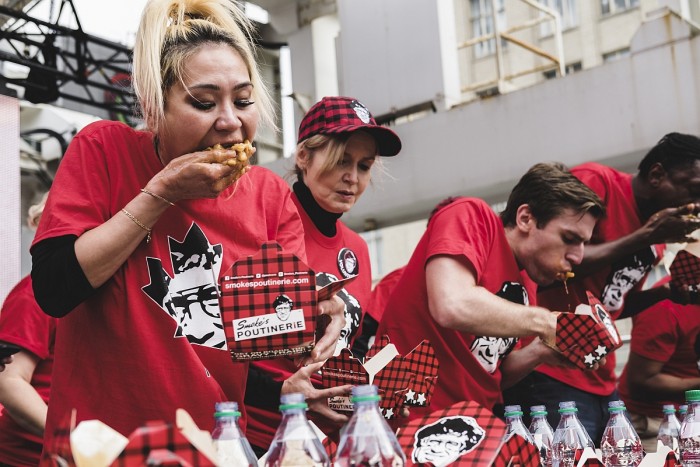 Then, shifting his promotions up a gear, Smolkin created the first of the now famous World Poutine Eating Championship events. Events are important as they’re “all about taking product to the people. Parking a “plaidified” truck inside the gates of Toronto FC’s ground at BMO Field, he set up an eating competition. “That flooded our social. Now I get 20,000 people coming and a million and people worldwide view it online,” explains Ryan. Events such as rock concerts continue to play an important part in creating a buzz for the brand and the Kiss tribute acts are destined to be joined by real acts very soon.

You don’t have to be crazy…

To be a Smoke’s Poutinerie franchise partner, “you don’t have to play air guitar and scream like I do,” Smolkin says. “Last year, we introduced a brand ambassador across all locations.” Entertainment will be the brand ambassador’s responsibility. The qualities that ideal franchise partners must have, he says, are common sense, ambition and the ability to work hard.

Smolkin reveals that the enigmatic, bespectacled face that appears on Smoke’s branding is none other than Smoke himself, the mastermind behind the brand, “the man, the myth, the legend” – Smolkin himself is only a front man. Apparently. “He feeds me all the ideas and only communicates through me.”

Global Franchise wonders, idly, if there are photographs of the mysterious Smoke? “Smoke is very shy,” Smolkin says. “But there are a couple of shots of him, in Qatar, as it happens. He allowed these because he was so proud of our recent expansion there. Unfortunately, in one shot the camera shifted and cut him off at shoulder height and in the second he bent over to pick up a French fry which fell on the ground, and the picture missed him. It’s an old 80’s style camera so we didn’t know what had happened until we had the film developed.”

Could Ryan Smolkin and ‘Smoke’ be one and the same man? Pressed hard for an answer, Smolkin concedes, “as far as equity or ownership goes and the direction of the company, I have 100% ownership. It’s all financed out of my pocket. There are no angel investors, no silent partners.”