The fast-food giant has spent three years developing its McPlant burger and finally unveiled it to the world yesterday.

McDonald’s U.K. and Ireland has joined the race to produce a high-quality, plant-based burger and emerged with the McPlant. McDonald’s partnered with Beyond Meat in February in an exclusive deal, and has spent the last three years itself perfecting various aspects of the burger, from the patty to the signature McDonald’s cheese. The burger has been designed to appeal to all; whether vegan, vegetarian, flexitarian or committed carnivore.

McDonald’s has an ambitious roll-out plan, with the view to going nationwide across the U.K. and Ireland in January 2022, a month in which many people and restaurants engage in Veganuary. First, the McPlant will be trialed in 10 locations in Coventry on September 29, and a further 250 locations on October 13, 2021.

“We’re so pleased to be finally launching McPlant in the U.K. and Ireland. As with every McDonald’s offering, we take our time to ensure it meets the highest standards and is something that all our customers will enjoy,” said Michelle Graham-Clare, chief marketing officer, McDonald’s U.K. and Ireland. 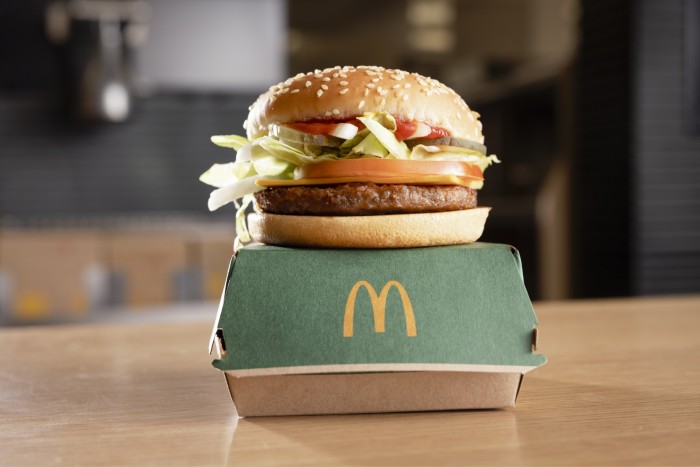 “We are always looking for different ways to innovate and meet our customers’ needs, and with McPlant we have a delicious plant-based burger that will appeal to everyone. Whether you’re vegan or just fancy a plant-based patty, we’re confident you will enjoy the McPlant.”

While the McPlant has been seen in countries like Austria, the burger still used dairy cheese and therefore was not vegan. This burger is entirely vegan, with a patty and cheese slice made from pea protein as well as an all-new vegan sauce. As a result, the burger has been accredited by the Vegetarian Society as a vegan product.

The McPlant has been in development for three years whilst several major fast-food chains have released their own plant-based burgers. McDonald’s has also shied away from a ‘vegan tax’ in the pricing, with strong suggestions that the fast-foot chain will charge no more than it would for a meat-based equivalent.

While there may be further vegan products in McDonald’s pipeline, the focus is entirely on the success of the McPlant before more products are added to the category.

by Global Franchise Team
Insight Franchising – a strategy for growth?