How the coronavirus pandemic has affected women’s careers | Global Franchise

How the coronavirus pandemic has affected women’s careers

How the coronavirus pandemic has affected women’s careers

COVID-19 has laid bare the shortcomings of our society. However, for a successful economic recovery, it’s not just about getting people back to work but making sure that diversity and inclusion efforts take center stage

COVID-19 has laid bare the shortcomings of our society. However, for a successful economic recovery, it’s not just about getting people back to work but making sure that diversity and inclusion efforts take center stage.

Words by Amanda Peters, staff writer at Global Franchise and What Franchise

Yes, the coronavirus pandemic has impacted everyone, but not equally. For instance, when it comes to careers and employment, the plain truth is that women are facing the raw end of the deal, and the numbers back it up.

According to a U.S. Bureau of Labor Statistics report, 11.2 per cent of women over the age of 20 were unemployed in June versus 10.1 per cent of men in that same age group.

Although the Labor Department stated that a record number of 4.8 million jobs were added to the economy in June, the National Women’s Law Center (NWLC) confirmed that many women were being left out of the economic rebound. Its data found that only one in three of the 12.1 million women’s jobs lost between February and April had returned.

This can be attributed to the sectors in which women primarily hold jobs, such as in retail or the service sector, which have been disproportionately hit by the pandemic. “In leisure, hospitality, education, health care and retail – the sectors that are getting hit the hardest – women are the ones who are falling victim to the first massive waves of this economic crisis,” said Emily Martin, vice president for education and workplace justice at NWLC, in a statement to CNBC. 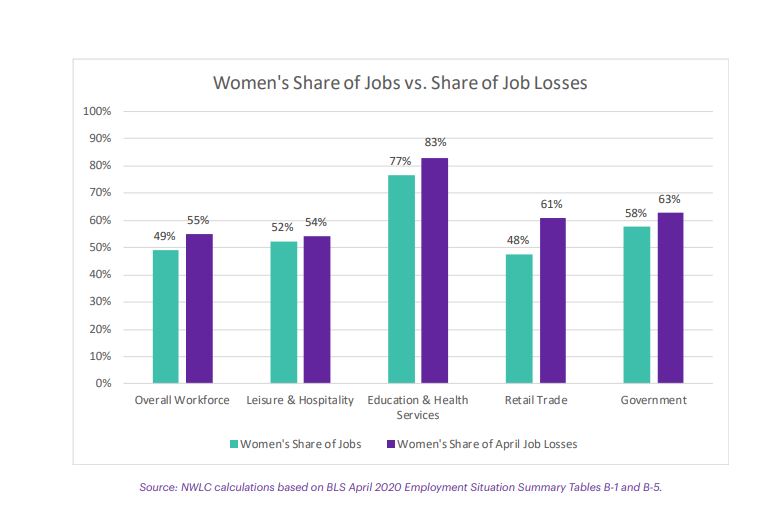 Employed: to be or not to be

Across the pond, things are not looking up for women either. As the second wave of COVID-19 hits the U.K., the latest data from the COVID-19 Clinical Information Network – or Co-Cin – which provides weekly updates on the disease to the Department of Health and Social Care, has found that there is a big rise in the number of women aged 20 to 40 admitted to hospital for serious coronavirus infections since the beginning of August.

Calum Semple, professor of child health and outbreak medicine at Liverpool University and a member of the government’s Sage committee, told The Guardian that he suspects that the rise is due to the jobs that women hold, such as in retail or hospitality. This has left them open to contracting the infection as people become lax around coronavirus safety and distancing guidelines. At the same time, there is no direct evidence to link it to schools reopening.

The picture isn’t good for black women or Latinas, either. In fact, NWLC data showed that 14 per cent of black women over 20 and 15.3 per cent of Latinas were unemployed in June. The silver lining is that these numbers are lower than what was recorded in May, but they are still far higher than June’s unemployment rate for white men, which was nine per cent. 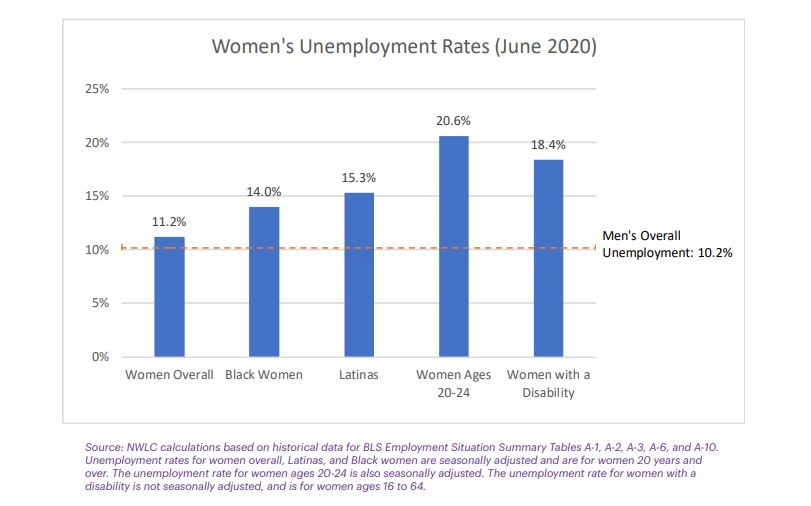 The second worry is that while economies around the world have begun to open back up, causing spikes in certain regions or even second waves in some countries, jobs that had been brought back in June, especially in the hospitality and service sectors, are vulnerable to being lost again.

Addressing the elephant in the room

Unique to this crisis, compared to other recessions, is the shutting down of the caregiving infrastructure. While schools and day-care centers closed, working mothers faced the added pressure of round-the-clock childcare during lockdown. According to business strategy adviser Boston Consulting Group, they were taking on 15 more hours of domestic labor weekly.

With women taking on a majority of the caregiving responsibilities, the lack of childcare and flexibility has caused them to choose between their jobs and families, which will have long-term repercussions.

A major concern here is that with governments’ back-to-office campaigns, women are at risk of being pushed out of the workforce. A survey for the Trades Union Congress revealed that two in five mothers in the U.K. were struggling to find childcare under the new circumstances.

Light at the end of the tunnel

Although many working parents have struggled to balance work and home life, especially after becoming full-time childcare providers and home- school teachers during the pandemic, franchising has proved to be the silver lining in these unprecedented times.

For example, a sector hard hit has been health and beauty. And while many were forced to close their doors for about three months in the U.K., never to open again, international hair salon franchise Just Cuts, although delayed, has opened new stores in the country.

David Mathie, Just Cuts UK general manager, said: “Even when taking into account the enforced three-month closure period due to the COVID-19 pandemic, all of our salons are thriving. So much so that there were record downloads of the Just Cuts app when salons were allowed to open again on July 4.”

The benefits brought about from having a franchisor are even more apparent now. “In some ways, we have been really lucky as we already work from home, we run our own business but we also have the support of our franchisors, so we aren’t on our own, we have a good support network,” said Rachael and Colman Coyne, Not Just Travel Jetset franchisees. The duo has run their successful franchise business for seven years and became mentors to dozens of Not Just Travel consultants, helping others on their entrepreneurial journey.

Zoe McKibbin, franchise owner of Razzamataz Edinburgh and Razzamataz Glasgow South, seconds that opinion: “I truly believe that without the support of the head office, when COVID-19 hit, I would have closed down because I would have just been overwhelmed with everything that we had to do. I have friends who run their own independent theatre or dance schools and they felt really lost during COVID.

“The benefits of being part of the Razzamataz franchise has really shone through during the last six months. They give you the information in really simple, digestible formats and they never overwhelm you.”

And it’s not just existing franchisees that are reaping the benefits. For those made redundant or furloughed during the pandemic, but always aspired to have a better work-life balance, have taken that leap of faith to become their own boss but under the safety net of a franchisor.

For instance, the virtual agency franchise Get Ahead VA recently welcomed new franchisees who were placed on furlough at the start of the pandemic.

For Essex businesswoman Sarah Yandell, being placed on furlough offered her a chance to pause and reflect. After many years of commuting and managing business teams, she wanted to work flexibly and from home, yet still feel a part of something. During her search, she discovered Get Ahead VA on what-franchise.com and it ticked all her boxes.

Sarah said: “I have worked in the travel industry for 30 years and absolutely loved it. But it was clear that travel was going to take some time to recover from COVID-19. I really wanted to work flexibly and locally, but I also wanted to feel part of a team and not just ‘go it alone’.

“Becoming a Get Ahead VA franchisee enables me to have the flexibility I wanted by working for myself but also be part of the wider team, with access to the fantastic experience of our virtual assistants.”

A necessity, not a luxury

While many are taking matters into their own hands and forging their own paths, the coronavirus has laid bare the shortcomings of our society, be it regarding gender or race. As global economies adjust to the ‘new normal’ and begin to open back up, it’s not just about getting people back to work; rather, for a successful recovery, businesses need to also focus on their diversity and inclusion efforts, that includes taking into account the needs of women.

This article featured in the latest issue of Business Woman magazine. Download it for FREE!

View All events articles
Insight How to embrace workplace wellbeing

by Raghav Patel
Insight The future of franchising in Australia