We and our partners store and/or access information on a device, such as unique IDs in cookies to process personal data. You may accept or manage your choices by clicking below, including your right to object where legitimate interest is used, or at any time in the privacy policy page. These choices will be signalled to our partners and will not affect browsing data.

We and our partners process data to provide:

At the age of just 30, Sam Orders has become a franchise owner, relocated countries – from Australia to the USA and Hong Kong – and risen rapidly up the career ladder, all within the same business

At the age of just 30, Sam Orders has become a franchise owner, relocated countries – from Australia to the USA and Hong Kong – and risen rapidly up the career ladder, all within the same business

For three years, the duo was hard at work building the business, after which they stepped away, passing the torch to another university friend and fellow franchisee, John O’Riordan.

While Shaun launched his own men’s lifestyle business, Sam headed to InXpress’ head office in the US to take up the position of onboarding director for the Americas.

“Straight after I left university in 2012, I started my franchise, so I had never experienced working for someone or being part of a team. As my franchise was continuing to grow through my own team, it seemed like the right time to go in a different direction,” says Orders.

As a franchisee, Orders’ regular travels to the brand’s conventions led to his move to the U.S. to become part of InXpress America’s head office team, based in Salt Lake City. He explains, “I knew it was important to learn from others, so Shaun and I always went to the US convention to learn from their top performers and head office team.

“I started building a relationship with the team, especially the CEO Dustin Hansen, and when an opening came up to join their coaching team, I couldn’t say no! Plus, experiencing life abroad and knowing I could learn to ski on the best snow on earth, made it even easier to say yes.”

Orders had been working in the U.S. for two years when another opportunity came his way. InXpress needed a new operations manager for the Asia Pacific and the skills and experience he had developed in the US meant he was well-positioned for the role. 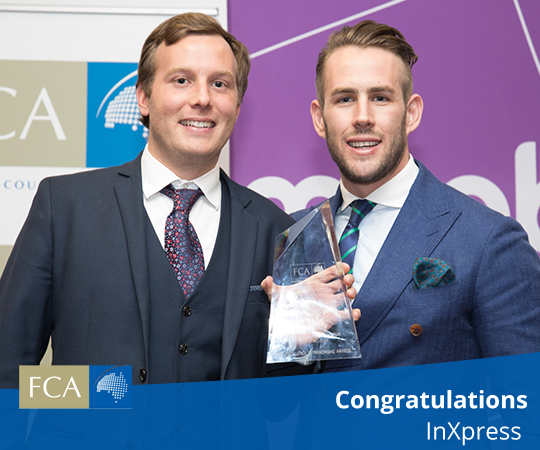 “My fiancé was a little homesick, so moving back to Australia and working as part of the InXpress Asia Pacific team, where I could continue to learn and grow professionally, was too good to say no to,” says Orders.

As part of the operations manager’s role, he worked closely with the region’s management teams and franchisees, including in Hong Kong. Thus, when the country manager left for pastures new, Orders was given his latest opportunity to take over the role.

As the country manager position was Hong Kong-based, it meant another move. However, Orders and his wife saw this as an opportunity to experience living in another amazing country, whilst fulfilling his ambition to be a country head for the brand.

It is not just Orders’ career ambitions that InXpress has helped fulfill, one of the business’ core values is to “give back”.

Since being with the franchise, Orders has been part of the InXpress Gives Back charity programs across the world, including helping to build a school in Fiji, removing non-native weeds and pests from a mountain in New Zealand, spending time with orphans in India, meeting, talking and socializing with elderly homeless people in Vietnam, repairing a community center in Orlando, U.S. and leading a team who cleaned up a beach in Hong Kong last month. “I don’t think many companies have made such a difference globally, nor would I have had those experiences in such a short time – they give me a deep sense of satisfaction and gratefulness,” he says.

Working for InXpress has exposed Sam to many areas of business that large corporations wouldn’t offer at an early stage, enabling him to develop his career and perform roles that would take years to reach in some organizations. Orders says, “That exposure and insight has taught me a lot. When I think about my future with InXpress it brings a smile to my face because the opportunities are endless.”

Mark Taylor, global CEO for the business says, “Sam’s experience of InXpress – as both a franchisee and as part of the franchisor team – knowledge of the landscape, the business, and the franchisees in Hong Kong, meant he could manage the transition smoothly; and we knew he could also push the business forward.

“InXpress is passionate about its talent management program and is always looking for people like Sam with great potential and invest time in their training and mentoring.”

News NerdsToGo unveils plans to develop multiple units across Houston, Texas
News Franchise Daily Digest: March 27
News “If we want to be a vibrant part of our communities, giving back is just a natural response”

News Meet the prestigious judges of the Global Franchise Awards 2022
You’ve reached your article limit for this month.

by Kieran M
View all